When I moved to the Bronx a year ago, I was excited to find a 2-bedroom apartment in my budget so that I could use the second bedroom as a studio space. It also functions as an exercise studio, housing my elliptical machine, yoga mats, free weights, and hula hoop. This is how it looked when it was first set up, on the day the movers brought everything: 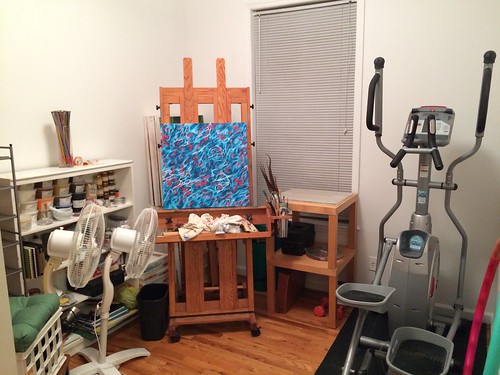 I replaced the stacked end tables with a proper taboret table (visible in the photos below) but the space was still functioning more like an overflow closet than a really workable art studio. As it became increasingly crowded and I had paintings leaning on every wall of my apartment (yes, even the bathroom), I realized it was time to reorganize things.

I worked out a fairly simple design for a storage rack that would hold two sizes of paintings and my massive photo printer. I bought about $70 of lumber and borrowed my father’s truck and tools. My mother generously spent her day off with me schlepping paintings from their attic into the truck, then everything up into my apartment, and she endured my stream of expletives when I realized I’d calculated half the measurements wrong and needed to adjust the design on the fly. 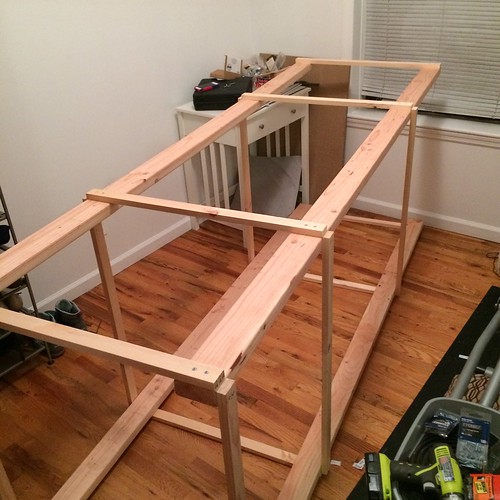 The rack stands 8 feet high, and its footprint is 30″x36″. The two most common sizes of canvas I work on are 24″x30″ and 30″x40″, so this is a perfect and efficient accommodation for both. I am planning to reinforce the top portion with another set of horizontals (not sure what I was thinking there), but it’s quite sturdy as it is. 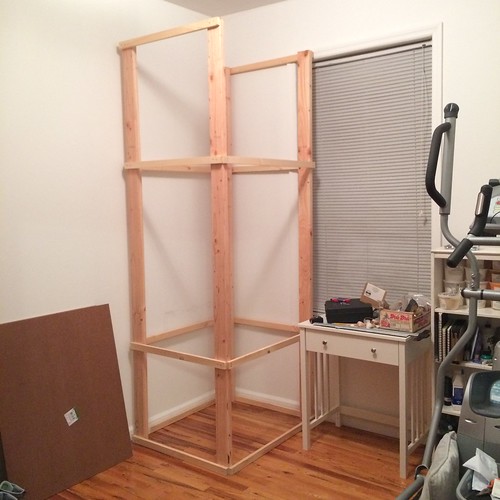 Because I goofed the measurements, the shelves I had pre-cut didn’t fit the way I’d anticipated, but they function well enough with some overlap. After breaking two bits trying to drill the masonite shelves, I left them unattached, but that is another modification I have planned, along with painting the whole thing with a “vintage aqua” wood stain. 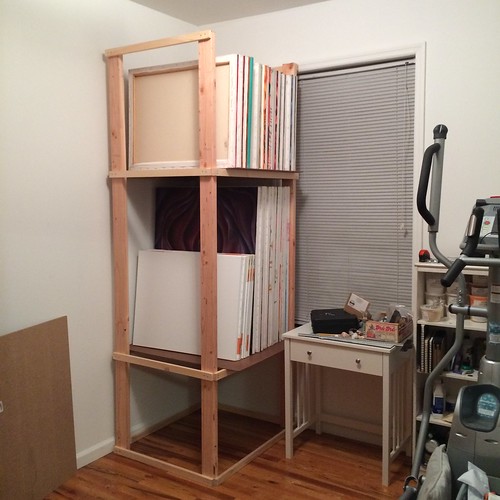 I was delighted to fit 52 paintings on the rack, which is most of my current inventory plus some blank canvas to move forward. I squeezed an additional 12 canvases in the base of the easel and beside it, to bring the total to 64, not counting the stack of 12″x12″ panels under my taboret. 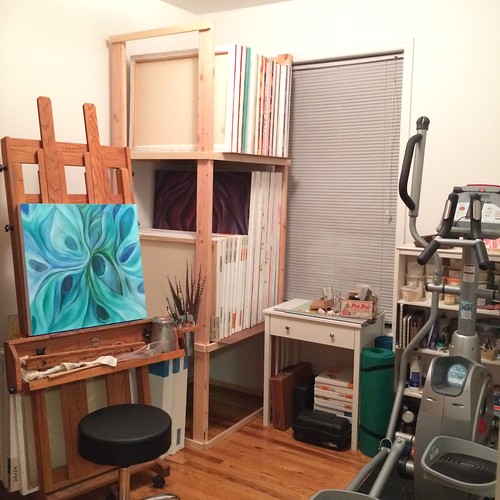 To make room for the rack, I moved the bookcase that holds most of my paint-making and drawing supplies to the wall that the elliptical machine faces. Frankly I’m stunned it took me a year to think of this solution, but it works so much better for mixing paint on the taboret. Moving the easel out of the corner and angled against the wall opens a lot of space side to side, so that I no longer feel claustrophobic or crowded when I’m working.

I’m really delighted with the studio reorganization and feel endlessly thankful to have had so much help and support in building the rack and working out a better use of the space. I have a few further improvements planned, including setting up lighting and a space on the wall opposite the easel for photographing finished pieces, but I’m incredibly happy with the way things are progressing.